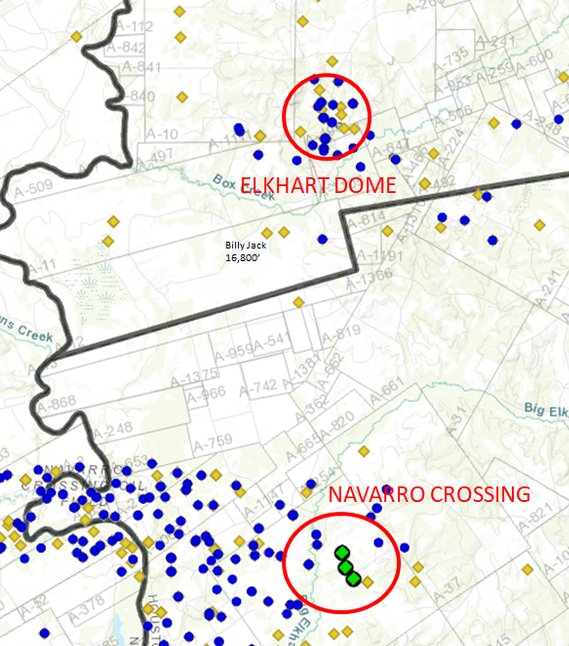 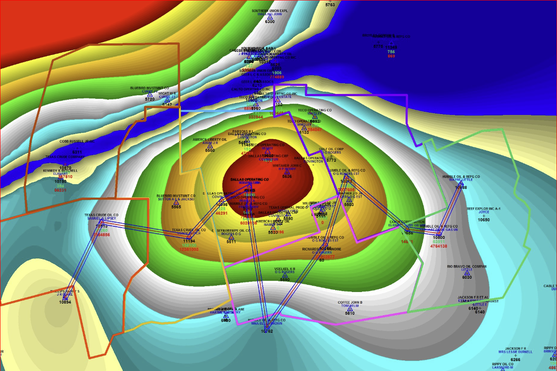 Travis Peak unit with 3-4 infill wells to drill updip. Travis Peak has more than 600 ft gross of tight oil pay along dome; with 136 ft net. Original well barely had a frac in bottom sections of Travis Peak because of mechanical limitations of well design (5k wellhead/csg).

There was pay all the way to the bottom of the Covington 2 well so there may be additional pay if drilled deeper in the fault block or in other blocks on the dome. Cotton Valley was not tested, but tested gas off dome to the south in Billy Jack #1.

Covington 3 Pettet seems to be tight but near virgin pressure in Pettet; suggesting fault blocks to the north and west could be productive. Porosity seems to develop off structure in Pettet, but it produced between 50-60 bcf off this dome in the fault block to the south (same block as Travis Peak).

Woodbine also produced well on dome but very complex. The shallow Wilcox which is also in the leasehold was seen in the Covington 1 log.

This is a great place to shoot a 3d survey!!!

Both wells produce via rod pump from the Woodbine. Pumps are currently set around 3,500 ft and shut-in fluid level is 300 ft with a flowing fluid level at 600 ft. So, productivity can be increased.

The Montgomery has the higher oil cut and the pump can be easily changed out to a larger insert pump.

Both wells can be increased via stroke rate on pumping units from 8 to 9+ spm.

Both wells could be increased with installation of tubing pumps or ESP’s.

The SWD currently disposes of 600 bwpd; about 300 bwpd via gravity. SWD pump can handle about 1,400 bwpd. In 2017, we installed new casing (long liner) and new tubing in daily SWD.

Selling 100% working interest in 2 fields in East Texas which are producing about 35 BOPD and 100 Mcfd gas; Elkhart Dome Field and Navarro Crossing Field. Both fields have development opportunities.  Elkhart has 3-4 development wells to drill in the Travis Peak oil sands on the dome and Navarro Crossing can be improved with increasing production rate on the wells.  Both fields are cash flow positive at this time.